You may have multiple goals to evaluate your testing. Define a key metric on the top-left first and then the whole report will be generated based on the key metric you defined.

Understand Uplift and Probability to Be Best #

Before analyzing a report, it is important to understand Uplift and Probability to Be Best.

When will a winner be declared? #

A winner will be declared at the top of the report if the following conditions are met:

How to view the probability distribution chart? 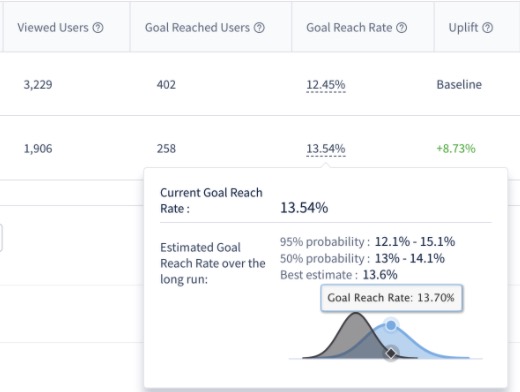 A good way to dig deeper is to break down the result into different properties. This may lead to interesting insights.

What if there’s no winner of my testing? #

If there’s no winner has been declared for a long running time. You can try to:

Was this article helpful?

Thanks for your feedback.

Sorry about that. Do you mind sharing how we can improve?

Thanks for your feedback.

We have received your feedback and will make sure to improve this article. We will get in touch with you once we do.